During my almost two years at BetBoom, a betting company from Russia, I have worked on many projects with several different teams. Most notably, I have worked with the "bet-boom.com" team on the redesign and relaunch of BetBoom in CIS area, Latin American and Australian markets, an effort which involved both product work in the form of building new features (such as parallel gaming) and redesigns of existing ones. Next, I will tell you more about what I managed to work on and what were the results of our work.
© 2021
gavrishov.dima@gmail.com
LinkedIn
Dribbble
Facebook
NEXT PROJECT
NEW PRODUCT

2 years ago, the company did not have an offer for markets other than the Russian market, and basically, the international website just duplicated the content of the Russian site. BetBoom decided to expand into new markets with a new offering by becoming a casual games aggregator.

After a few months of working on the Russian website and some marketing efforts, I have been relocated to the new team and asked to suggest a new look for the international website. Together with our research team, we have come to the following idea:
Since we are going to have thousands of games instead of those 10 we used to have, our website must facilitate the navigation on it and filter the content based on user's most popular preferences.
gavrishov.dima@gmail.com
REDESIGN 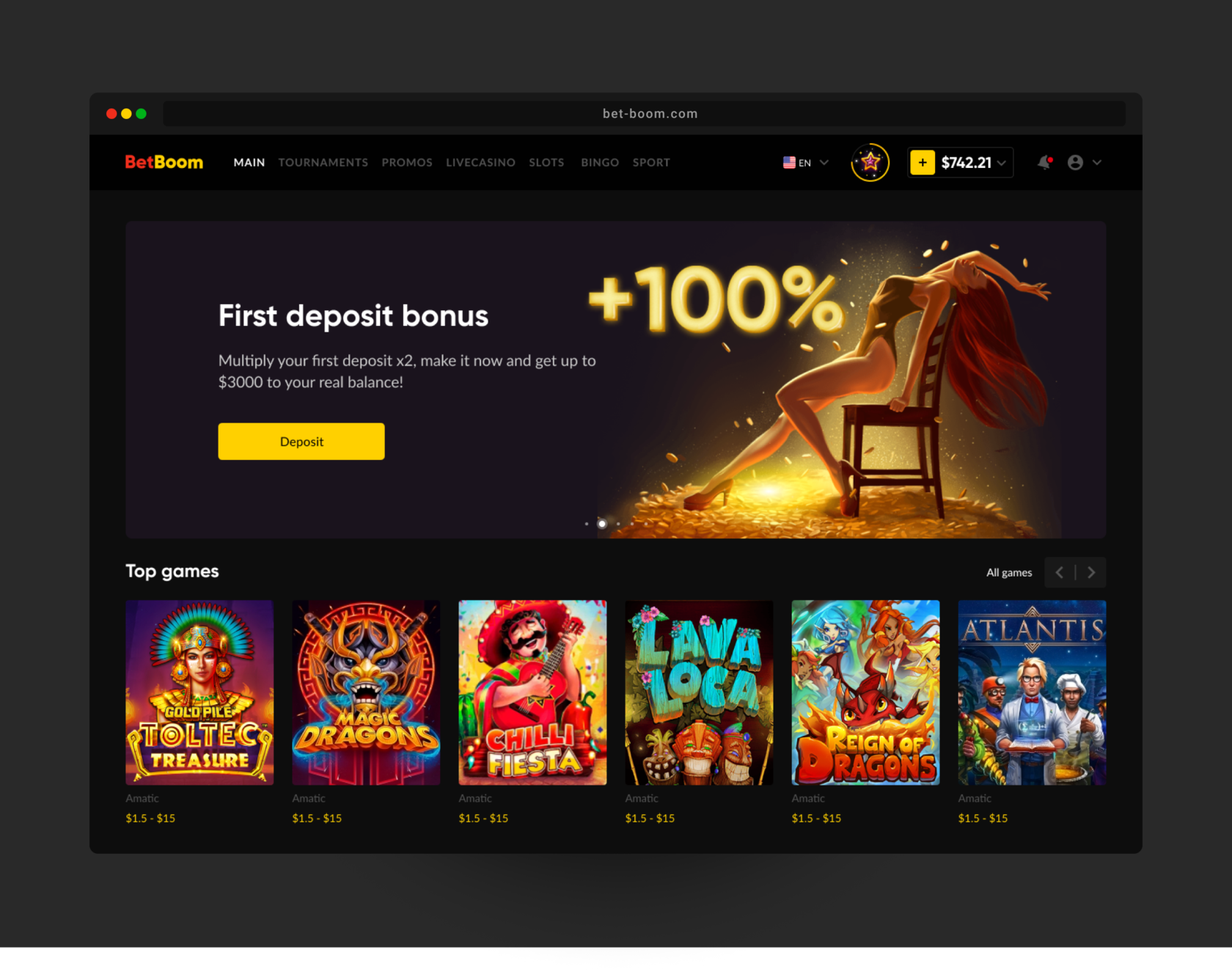 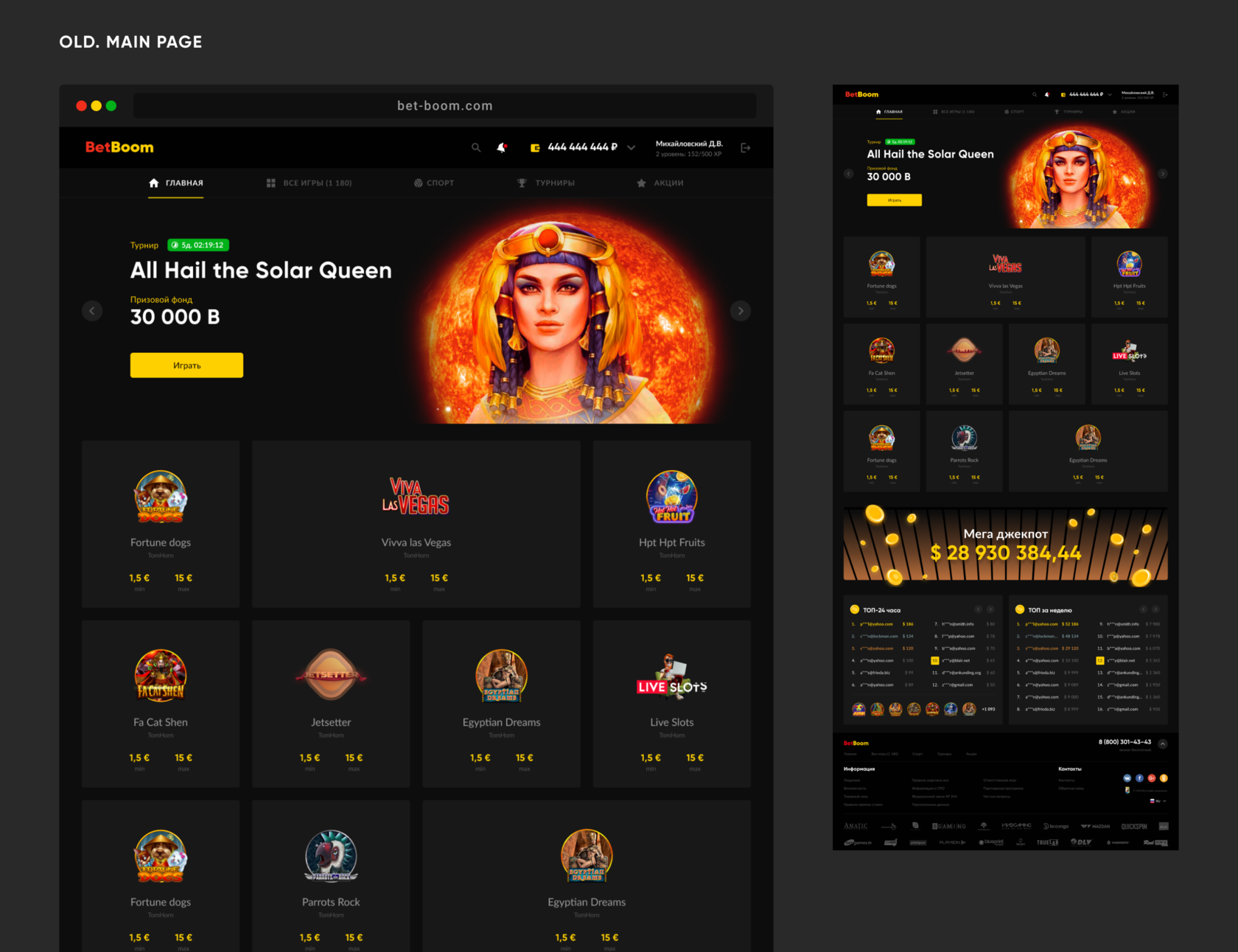 The new home page becomes a kind of filtering result, a signpost with directions for further movement, and the main difference from the old version of the site is the ability to accommodate a tenfold increase in the amount of content.
AESTHETICS
The old visual language was strict and restrained, often fragmented. To add more colors, to make the interface aesthetically pleasing and in a unified style, I suggested using pseudo 3D in illustrations for the site.
PARALLEL GAMING
This functionality was inspired by online poker. Often the process of playing slots is a monotonous pressing of 1 button until the moment when a winning combination appears and an auto-bet exists to automate the process. By analogy with poker, it can take a long time before the active phase of winning with a successful combination occurs. In online poker, professional players play multiple tables at the same time to increase the number of hands played. We decided to introduce similar functionality to our website. The idea was to increase the number of winning combinations at a time. Playing 2-4 games at the same time gets you more opportunities to see the cherished “777”, and in order to not interrupt the game process, we have added the ability to minimize the game window while navigating the site.

The addition of this functionality allowed us to increase the number of game spins by 37%, which is equivalent to an 11% increase in the number of visitors.
NEW FEATURES

FAST DEPOSIT
Previously, balance replenishment was possible only from the personal account page, and in order to make a deposit, the user had to go deep into the site`s informational architecture. To simplify this process, we have added the ability to replenish the balance directly in the header and now players can make a deposit even while being in a game. The current mouse click heatmap shows that now more than 70% of replenishments start from the button in the header of the site, and the number of replenishments has increased by 8%.
BONUSES
Due to the fact that the company decided to rework the entire chain of promotional mechanics on the site, it was necessary to redo all CJM steps from the moment of registration to the moment of the first deposit, as well as add retention value for our active users.

First of all, we changed the bonus offer and made more emphasis on the process of getting/wagering it. Now, after changing the site design and information architecture, the user always sees when there are new offers for him, which in turn increases the conversion of bonuses activation. The new section "Bonuses" in the Personal Account brings to the fore all the unique gifts that we are ready to give our users for active play, and subsections of "Active" and "Finished" bonuses make it possible to track the progress of wagering and getting real money from the company's promos.
OTHER
This is just a part of what I have done while working with Betboom and more stuff is still in progress, but I hope you got the idea :) Check my other projects(Payhub for example) if you want to see more of my process instead of visuals.
Made on